If you are viewing this you are looking at a page generated from my “Web Server in a Box” that I constructed on the 15th of November, 2012. The “Web Server in a Box” is a project kit that was first published in the November 2009 issue of Silicon Chip, an electronics magazine that is quite popular in Australia as well as other countries. The kit is based off a PIC microcontroller and uses a SD card (not included) to store the website information as well as configuration data. I used a 16GB card in mine so plenty of room for general web storage.

I purchased the kit from Jaycar Electronics, CAT. NO. KC5489.

Over time I will add pictures and updates which hopefully will help someone else out there have as much fun as I did with this interesting little project.

Planned future modifications include an LCD to show the time and date which will be synchronised with an internet time server, similar to the one here. I would also like to include temperature, rainfall, wind speed and direction as inputs into the unit (it has four analogue inputs) to display on this page.

If you want to get in touch with me, you can email me here – substitute the “-at-” for the at symbol – wib-at-symon.id.au

Well I finally got the LCD add-on working. I initially tried to use a PIC to control the LCD but rapidly got sick of trying to find a programmer that would a) work b) be cheap and c) work with the PIC's I already had. After a couple of days I threw my hands up in disgust and went for an Arduino instead.

The unit I got was a Leostick from Jaycar for about $30. This was MUCH easier to use and best of all the software is freely available. After working out how to drive the LCD (2 x 16 character unit from Jaycar) which was a rather easy task due to the tutorials that you can get from the Arduino site, the next biggest challenge was to get the time working. There is a Silicon Chip Internet Time Display Module available that takes serial data from the WIB (which in itself is synchronised with an internet time server) and uses it to drive a 4 digit 7-segment display. Whilst I am sure that unit works well... in the looks department... it well... kind of sucks.

Inspired by @rt's OCAU thread for an LCD add-on project I tired to mimic what he had done and ran into a heap of problems with PIC's as I said earlier. That isn't to say Arduino's don't have their problems either , they do, and one of the annoying ones I found with the Leostick is that about 10 seconds after you plug the unit in the USB interface is disabled. So each time you make a change you have to either a) pull out the unit and plug it back in or b) reset the unit, and then you have 10 seconds to hit the upload button in the programming software or you'll have to do it all again. Initially this wasn't too much of a problem as the reset button was easy to get to, but later on when I had the box assembled it was a real pain.

Eventually I hacked up a USB to mini USB cable and soldered directly to the USB pins on the Leostick. This allowed me to make code changes without pulling the box apart.

For a programming numpty like me the extraction of the time data from the WIB was a challenge. I could not have done it if it wasn't for Ian Stedman's website and in particular the TDM format information on his wiki.

Anyway, here is a couple of pics - 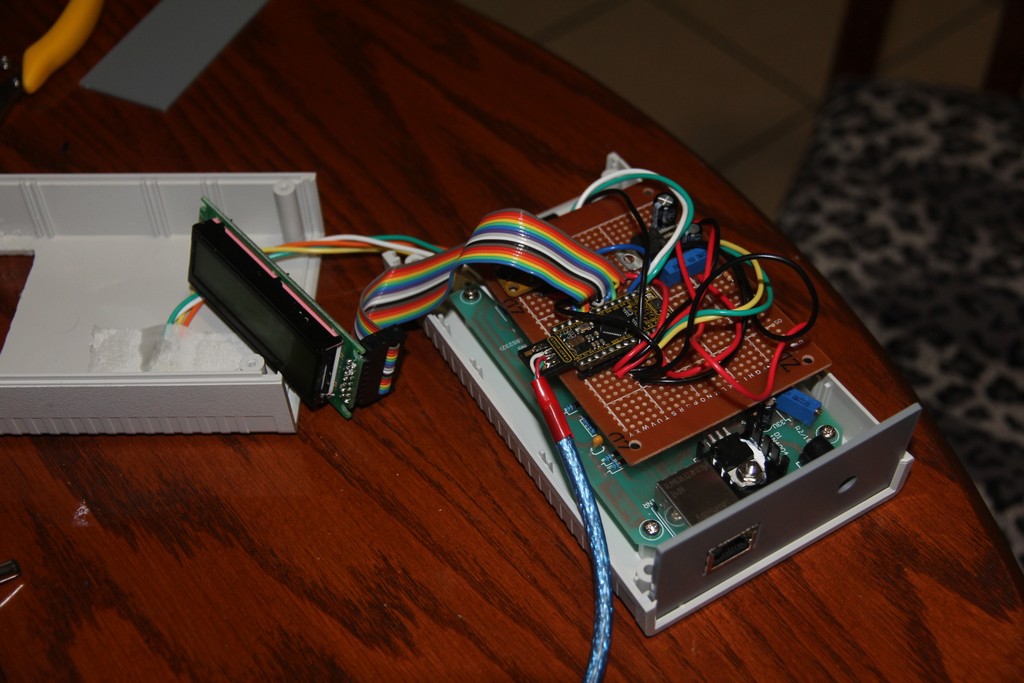 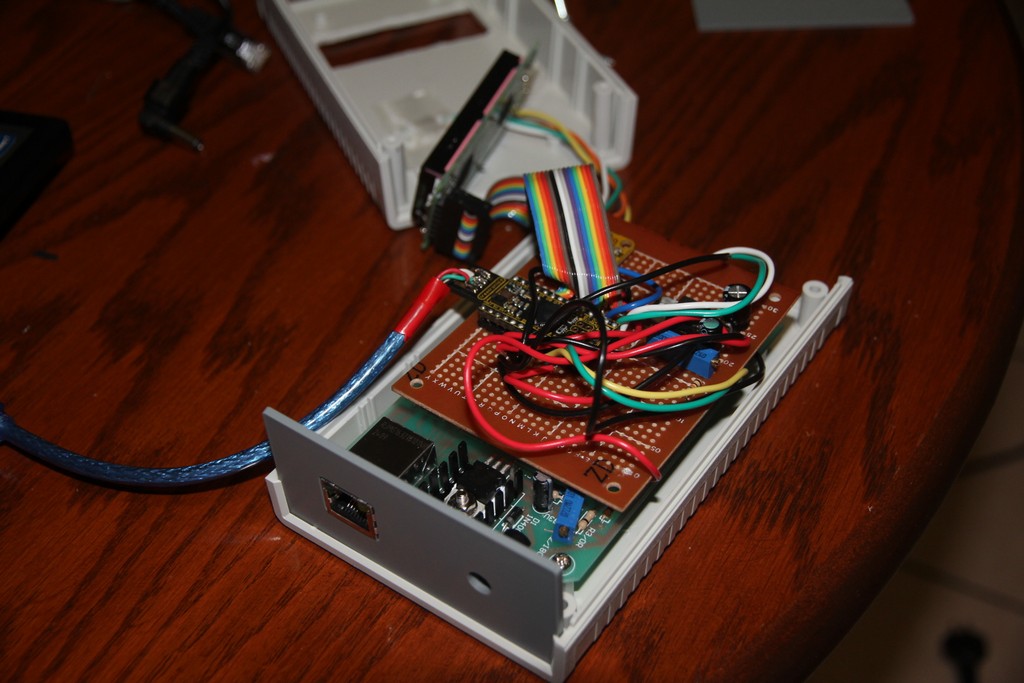 I also installed a temperature sensor and voltage input to the Leostick to monitor temperature inside the box and the voltage of the supply. Since the box is not ventilated I wanted to see how hot it would get inside, and since I also intend to power this unit from solar it would be handy to monitor the battery voltage. 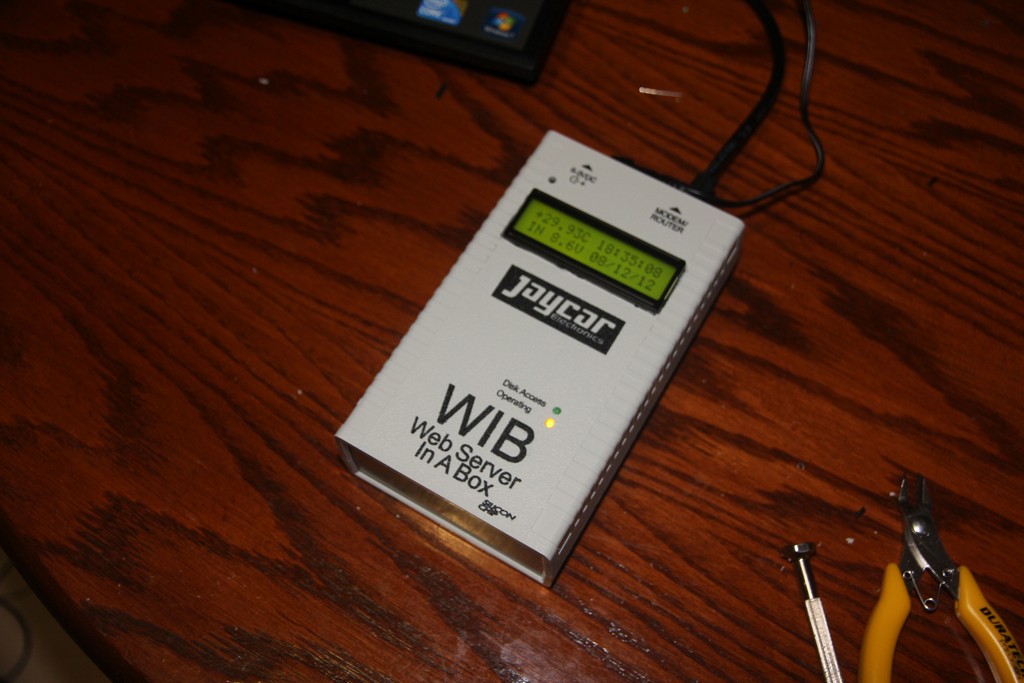 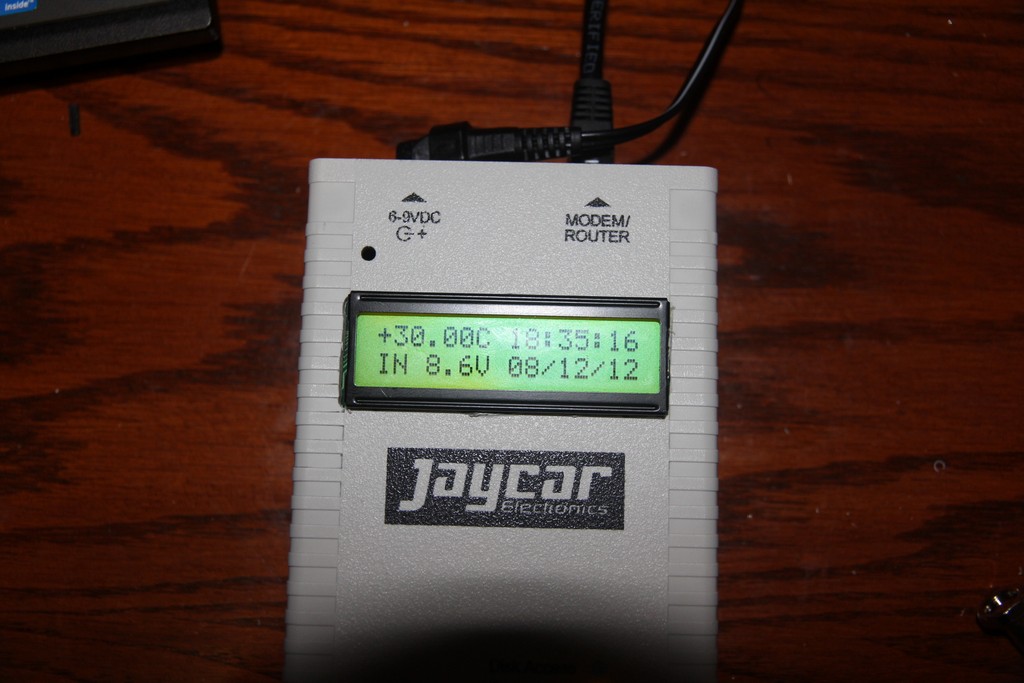 The code I used is below, most of this is copied, pasted and modified from various sources, so I am not claiming ownership in any way for this -

For those who are interested in using a PIC for the LCD add-on you can download @rt's source and hex files here. (freeware, not GPL) Also included is an updated version of the V.30 code for the WIB's PIC that provides for a lot more features such as email notification and a scrolling odometer effect. You can find a lot more information on his website here.

Other links of interest -

David's WIB (hosted from his WIB so slow to load)